It’s funny how sometimes I’ll look at Enzo and see my toddler, but then some days I’ll look at him and instead of a toddler I see a little boy.  It tugs at my heart to see him growing up so fast, but at the same time, it can be quite entertaining.  Often, he has to remind me that he’s a big boy now, though, otherwise I just tend to not think about it. 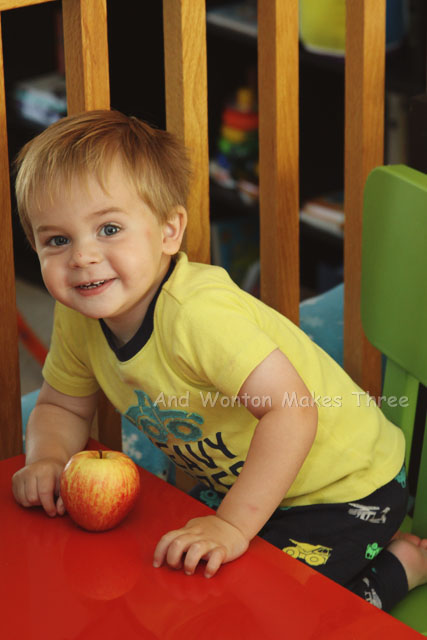 Like with apples.  I’ve always cut up his apples because they’re a choking hazard, you know?  Well, it never occurred to me that he can probably handle an apple fine on his own, so one day he had to tell me that he wanted the apple whole (not his exact words, but I’m sure I asked if I could cut it up for him first, and he probably said, “No!” vehemently).

Who would have thought handing him a whole apple would make him so happy?  He carried that thing around most of the morning, slowly gnawing away at it.  Such a simple thing, but a big reminder of how fast he is growing and how independent he is becoming in so many ways. For instance, I have to now put away the kindle and my phone because the little stinker knows exactly how to get to games and videos and will happily sit (in my bed) using either without asking.

We haven’t been doing a lot in the kitchen together, but I suppose it would be a really good time to encourage his love of helping and see what tasks we can give him to help with dinner and other things.  He still loves helping us empty the dishwasher, so there is always that, but I’m sure we can think of some other things considering how his eyes light up when he gets to do something new that he couldn’t do before.

I’m actually hoping that by involving him in dinner more, maybe he’ll be more willing to try all of his dinner without us resorting to bribing him with M&Ms (Healthier knock-offs, actually).  Yeah, yeah, he only gets a couple, not a handful, and it has helped encourage him to try everything on his plate.  There have even been times where he’s decided he really likes an item and eats more than required for his beloved candies.  It’s not ideal, but at least he’s trying new things and finding things that he likes.

Oh, these tricky toddlers!  They do make life interesting, that’s for sure, and as always make me see the world so much differently than I used to. I’m really grateful for that.

One thought on “The Independent Toddler”