I can’t believe that Phoebe is almost a year old and that it’s almost time to start weaning her off of formula and bottles.  Increasing solids shouldn’t be a problem since she is still loving food and we have no problem with her trying new things.  There are, however, things like yogurt that she can’t quite feed herself with a spoon yet, so we’ve been getting a ton of use out of the reusable pouches lately. 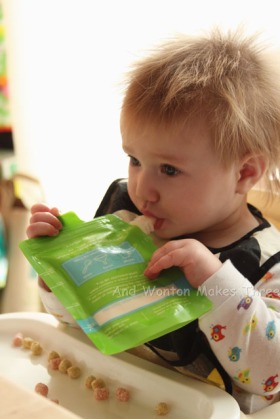 After her really bad diaper rashes, we’ve stopped giving her strawberries and it seems like those might have been the culprits.  Thankfully, she can still enjoy raspberries and blackberries, which are her new favorites.  The only downside to blackberries is that it looks like she’s murdered someone after she’s done eating them.

Both kids get served the same things we eat for pretty much all of their meals.  If there is something that might be too difficult for Phoebe to eat (or too much of a junk food for either kid, but mom and dad ran out of time) we thankfully have some Earth’s Best freezer options for them.  Both kids really love the raviolis, so it’s a nice last minute dinner or lunch.

Both kids love their breads, though, which can be both good and bad.  I do try to use Whole Wheat for most things and keep down our white flour intake, but they definitely take after their mom.  I LOVE bread.  It’s no surprise that they love weekends when I’m more likely to make muffins or homemade blueberry pancakes. 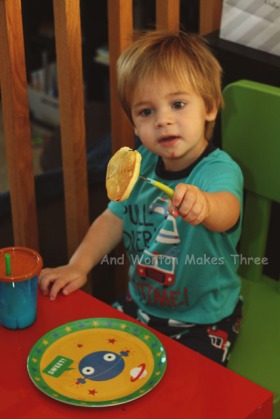 It’s funny to me how different the kiddos are when it comes to their eating styles.  As a baby Enzo was often cautious about what was on his plate and he’d carefully inspect his food, especially if it was something new.  Phoebe, however, barely gives me time to put down the tray some days and already has her hands wrapped around whatever looks good… steak, chicken, salmon (the girl is a carnivore), blackberries, roasted veggies… you name it.  A girl after my own heart. 😉

The food rut kind of continues.  I keep meaning to start scheduling meals again and look up a few new recipes, but then life happens and we get busy.  I’m starting to think of new things to offer the munchkins, but if they’re enjoying what they’re getting and it’s healthy then I might as well stick with it. 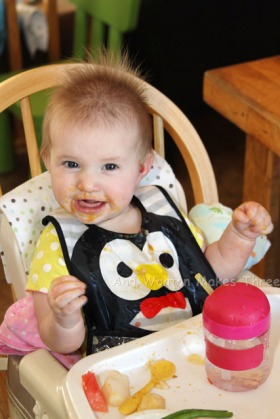 We aren’t doing many purees with Miss Sassy Pants anymore simply because she really has no interest in them.  In a pinch (or if she’s really hungry and decided she didn’t want what was offered) she will accept a pouch, but really prefers to hold onto it so she can feed herself.  She’s gotten to a point where she also prefers to attempt using a spoon for yogurt herself as well.  It’s messy, but she enjoys it… mostly.  We’re still dealing with some frustrations as she tries to make her hands do what she wants them to.

One thing she greatly enjoys is salmon, and you really can’t blame her.  It was one of Enzo’s favorites when he was a baby as well, however, he has decided he no longer likes it.  More salmon for us then? 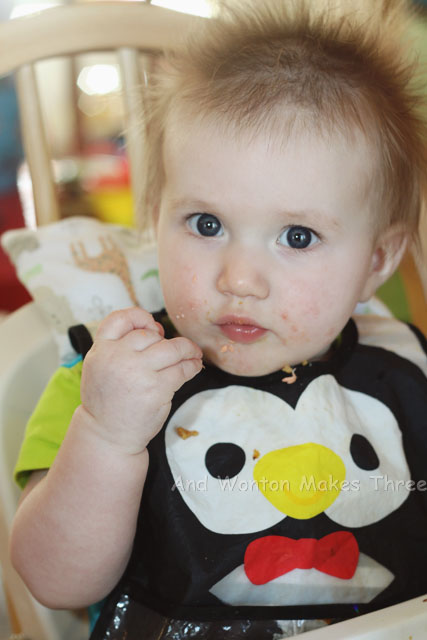 I’m hopeful that Phoebe’s willingness to try everything will stick with her.  I want to say that even as a baby, Enzo was a tad more picky about food than Phoebe is, so we’ll see what happens.  I also know that picky eating seems to just be a standard toddler thing from talking to other parents. 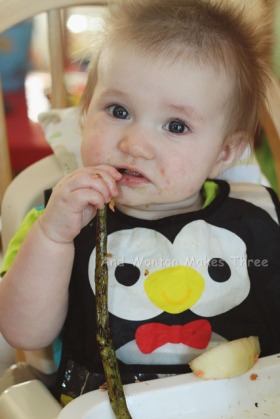 One thing that’s funny to me is that you can generally guess what Phoebe will reach for first on her plate.  If there’s meat – she’ll definitely go for that first.  If there’s something like banana bread or some other tasty grain – she’ll make a grab for it.  I want to say that Enzo was the same way. Now, we just patiently wait to see what Enzo will eat first because we never know.

Okay, generally he’ll go for fruit first (especially watermelon)… or his dipping sauce.  We try not to give him a spoon when there is dip on his plate otherwise he’ll just eat that plain when you aren’t looking.  Kids.  Like I said earlier, our meals haven’t been super creative lately… mostly because we’re busy and since I know I can count on Phoebe to eat roasted carrots and green beans, we eat a lot of those.  We also discovered that Enzo will gladly eat green beans, but they have to be fresh – not frozen.  Guess I can’t blame him, they are far superior. 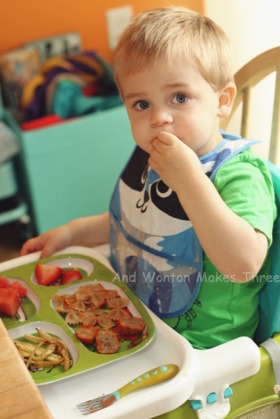 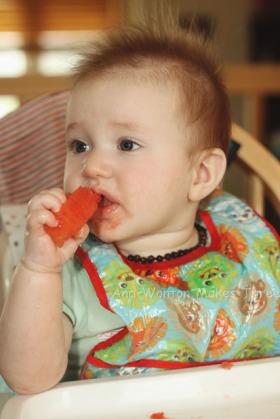 They also both love pasta and watermelon.  I’ve been trying to get Enzo to enjoy some of the amazing nectarines and peaches I’ve been buying, but the boy is so picky.  Occasionally I can bribe him with a candy or something and he’ll realize they’re delicious and eat everything and accept a couple measly candies, but that doesn’t always work.  Oh well, we’ll keep working on it.  One thing we’re pretty firm about is that dinner is his only option.  No snacks if he gets hungry later, and we’re doing better when it comes to keep him from snacking before dinner.

You see, when Enzo gets picked up from day care usually the first thing he asks for is a snack, so he we’d give him one.  We realized that his snacks were filling him up just enough that he’d decide not to eat most of his dinner.  We’ve been a little more firm lately about giving him only a tiny snack on the car ride home if he really wants one (some raisins or something) and he’s been doing much better about eating his meal.

Also, we finally bought a drop cloth for baby girl… bet you can’t guess why. 😉 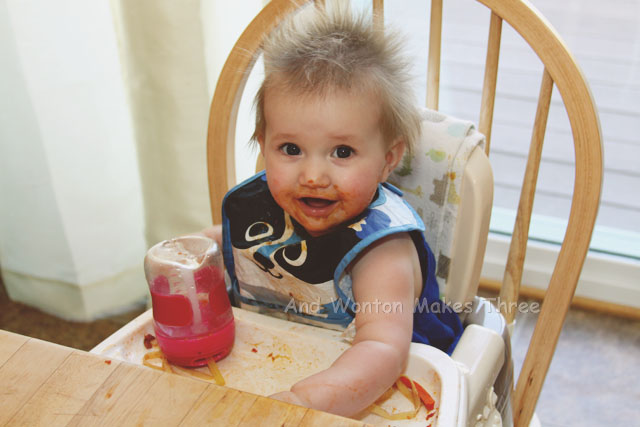 It’s funny how sometimes I’ll look at Enzo and see my toddler, but then some days I’ll look at him and instead of a toddler I see a little boy.  It tugs at my heart to see him growing up so fast, but at the same time, it can be quite entertaining.  Often, he has to remind me that he’s a big boy now, though, otherwise I just tend to not think about it.

Like with apples.  I’ve always cut up his apples because they’re a choking hazard, you know?  Well, it never occurred to me that he can probably handle an apple fine on his own, so one day he had to tell me that he wanted the apple whole (not his exact words, but I’m sure I asked if I could cut it up for him first, and he probably said, “No!” vehemently).

Who would have thought handing him a whole apple would make him so happy?  He carried that thing around most of the morning, slowly gnawing away at it.  Such a simple thing, but a big reminder of how fast he is growing and how independent he is becoming in so many ways. For instance, I have to now put away the kindle and my phone because the little stinker knows exactly how to get to games and videos and will happily sit (in my bed) using either without asking. 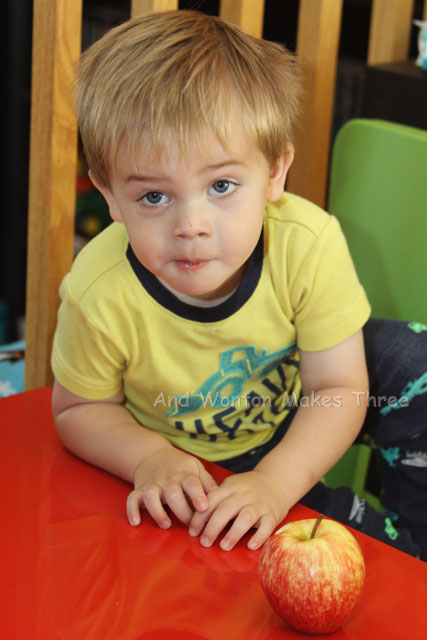 We haven’t been doing a lot in the kitchen together, but I suppose it would be a really good time to encourage his love of helping and see what tasks we can give him to help with dinner and other things.  He still loves helping us empty the dishwasher, so there is always that, but I’m sure we can think of some other things considering how his eyes light up when he gets to do something new that he couldn’t do before.

I’m actually hoping that by involving him in dinner more, maybe he’ll be more willing to try all of his dinner without us resorting to bribing him with M&Ms (Healthier knock-offs, actually).  Yeah, yeah, he only gets a couple, not a handful, and it has helped encourage him to try everything on his plate.  There have even been times where he’s decided he really likes an item and eats more than required for his beloved candies.  It’s not ideal, but at least he’s trying new things and finding things that he likes.

Oh, these tricky toddlers!  They do make life interesting, that’s for sure, and as always make me see the world so much differently than I used to. I’m really grateful for that.

I’m not gonna lie, we’ve been in a food rut lately and are trying to find some new meals to mix in with our favorites, as well as ways in general to just get our picky toddler to eat something besides cereal bars (his favorite).

Actually, he’s been doing pretty good and sometimes will completely surprise us by suddenly eating something he’s been politely refusing for several months (which is why we continue to keep offering it).  Things like green beans or even meatballs.

Phoebe continues to try just about everything and loves her meat.  Most recently she enjoyed some pork loin, chicken, and really went to town on a piece of steak.  I really just love that she’ll try everything, and really think about whether or not she wants more. She’ll kind of hold it in her mouth and might even go back for seconds before making a decision. 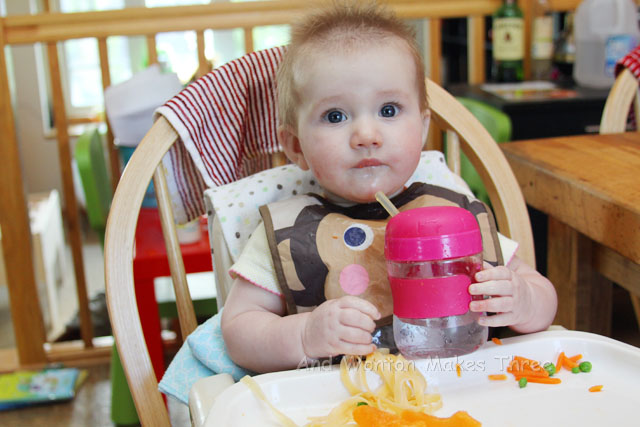 I think most surprisingly, Phoebe hasn’t gotten as much into pasta as I would have thought. Could it possibly be too messy?  Or maybe it’s a texture thing. Either way, her brother doesn’t mind the mess. 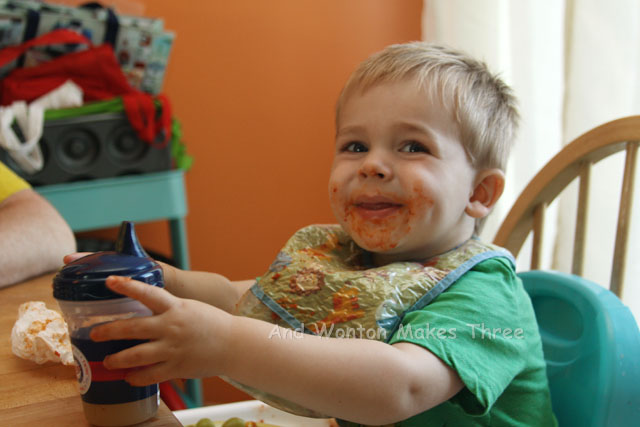 I’ve also gotten really good at tiny omelets, which is a good thing because lady has decided more and more that she either wants to feed herself anything purreed or mushy, or she doesn’t want it at all.  I’m running low on ideas on what to feed her and send to day care since she is also still toothless. Still!

It seems like I had so many more ideas with Enzo… and more time.  Plus, I want to say he definitely had teeth by now, so that’s been throwing me a tad.  I know she’ll get them soon enough and her gums are pretty strong, but unless I can convince day care to give her the spoon, I’m going to need some new solid food ideas.

Does anyone else spend way too much time on Pinterest looking at super yummy recipes?  I only wish I had more time to try them all. Recently, though, I realized I had just about everything we needed to make this ice cream that I had pinned and figured I might as well. So, once the kids were down, I made Blueberry Vanilla Cheesecake Ice Cream. 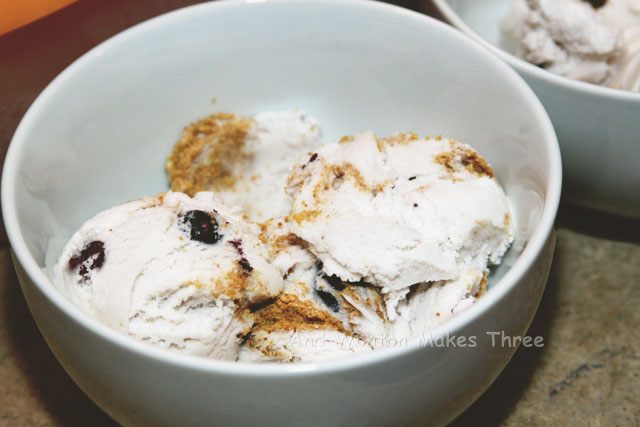 The first thing you’ll probably notice is that my ice cream is not purple, and that was because I decided to not really mash the blueberries very much.  Leaving the blueberries whole means that you get these frozen balls of awesome in almost every bite that burst with a bunch of flavor versus mushy blueberries that have no flavor at all. Your call. I also knew how much Enzo loves frozen blueberries and figured he’d enjoy them in their whole form. Anytime I make smoothies, I can count on Enzo to carefully pluck out the frozen blueberries and pop them into his mouth. They’re one of his favorite snacks. 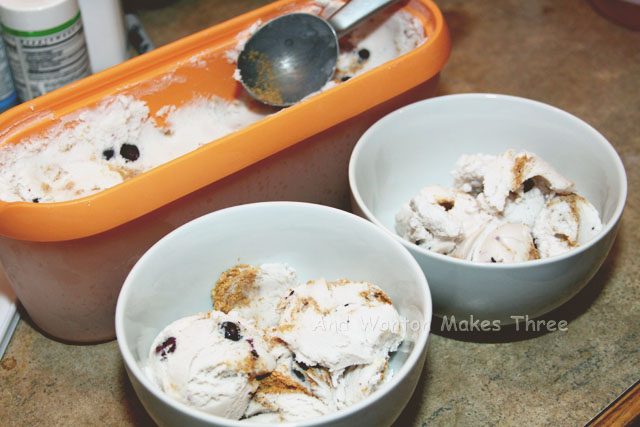 Anyhoo, was the ice cream good?  It was actually really tasty, and now I think strawberry cheesecake ice cream would be an equally brilliant idea.