I really need to come up with an alternative to photo “dump.”  I just don’t like that word…  Here we are, though, with a bunch of pictures and no place for them to be, so I’m giving them a home here because I can, and also because I’m not going to be posting as much this month in general.  I’ve decided to change the blog (this time it’ll be the last time), but it will take some time to move everything, so in the meantime I want to focus on that a bit and not add too much more to this blog that will just need to be moved later.  I figure we might as well start off 2015 fresh, so that is my plan. 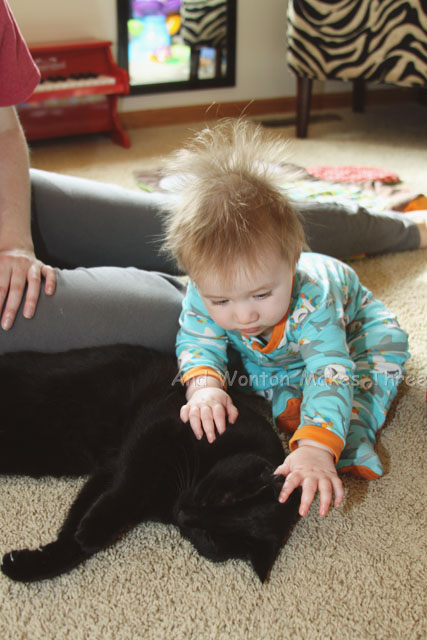 Alas, photos like this are a thing of the past as Enzo is waaay too loud for the cats and Phoebe is now far too mobile and doesn’t understand “gentle.”

Before she was a stair master.  We’ve had a couple of tumbles, but for the most part she can go up and down by herself.

I haven’t done a Munchkin Meals linkup in a bit, but it wouldn’t be much different then before except that Enzo has gotten a tad more picky in many ways and only ever wants pizza.  Go figure.

This lady started the day care food program this week, which thankfully saves me some time as I don’t have to pack a lunch for her now.  Food of any kind is hit or miss with Enzo, but Phoebe will try just about anything… at the very least I can count on her to eat all her fruits and veggies, so what more could you want? 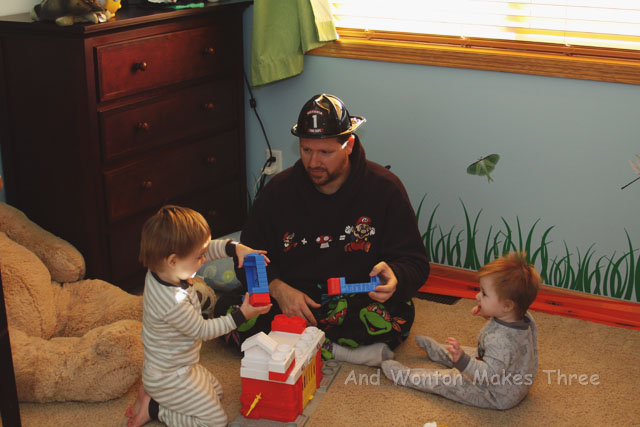 These two are still hooked on firetrucks. 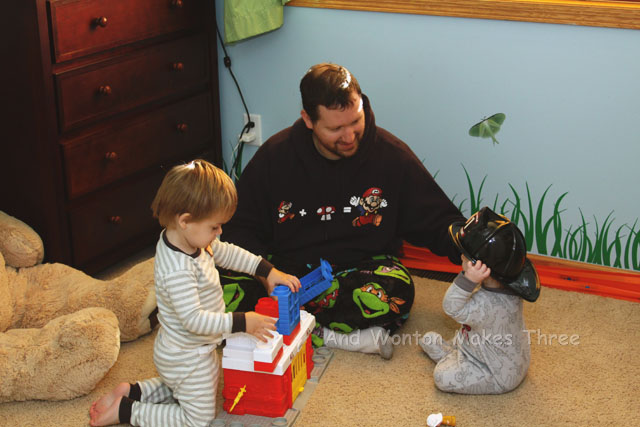 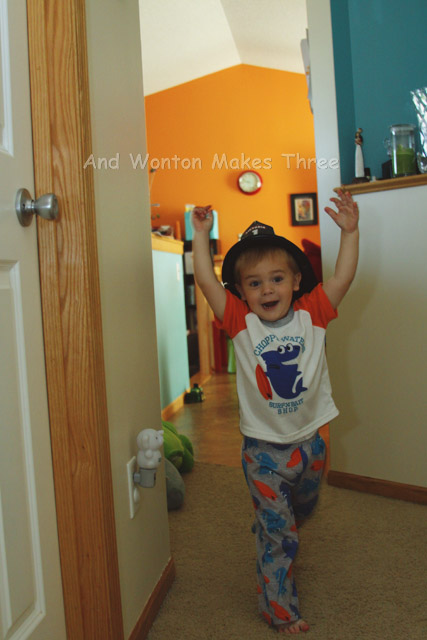 Yep.  It’s been a long week with much interrupted sleep, so Happy Tuesday.

One of our big projects this summer has been rearranging and organizing the downstairs with the ultimate goal being that we’ll use it more often. Right now it’s mostly used by the cats and our office(s) are down there.  Our big TV and big comfy couch are also down there, but we haven’t been using either of those things. Admittedly it’s kind of nice to just fall asleep in bed while watching a movie and not have to make the climb upstairs, but I know the cats miss us hanging out more often.  We don’t sleep well when they’re allowed upstairs, so that is the biggest reason for their banishment. 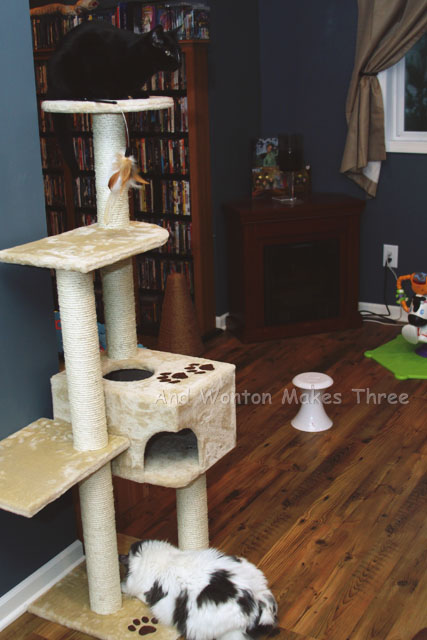 Enter a new cat tree for them.  It hasn’t completely stopped Uzi from destroying our nice couch, but that combined with tape seems to have helped a tad.  Sigh. I guess I can’t get too mad at him since I know he doesn’t like being banished, so the couch ruination is partially my fault. One day I’ll have nice things… one day. 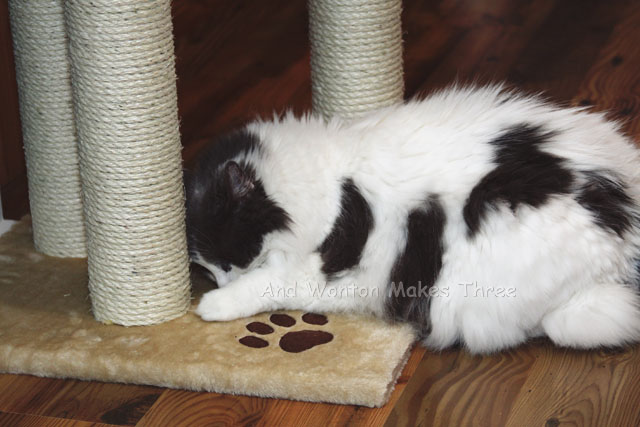 I’d like to say they’ve been utilizing this tree every day, but they haven’t.  I’d put it in front of a window, but there isn’t really a good window to put it in front of.  They’ve actually been spending the most time in my office because they have a nice bed in there to sleep on (for now). Come October, the bed will be moving upstairs into Enzo’s room.  Not like the cats don’t have a dozen comfy places to sleep.

One of the major drawbacks to having hard floors downstairs is how much colder it is.  If we decide to stay longer than one more winter we’d like to pull those up and put in carpeting.  As it stands we have a rolling space heater and bought one of those fireplace heaters as well, which actually works really well.  Maybe this winter we’ll spend more time with the kiddos… if I can find some more rugs so little tootsies don’t freeze.  In the meantime, I should probably make it more of a cat haven since they’re the ones who spend their days down there.  And maybe I’ll invest in one of those robotic vacuums for cat hair because good grief they shed like crazy.

Lest anyone should think the fur balls are unwell, they are in fact doing quite fine. We even got them a new cat tree since they spend so much time downstairs and could use some more places to hang out and sharpen their claws on.

While these pictures are a few weeks old, we do have some rare moments where they both will hang out upstairs even if the kids are present.  Both of the kids get so excited to see the cats that it’s hard to explain why Ziggy always runs away and why Uzi sometimes will allow affection and sometimes won’t.  Cats are fickle creatures. Since Phoebe is sitting up all the time now, photos like the above will happen less and less. 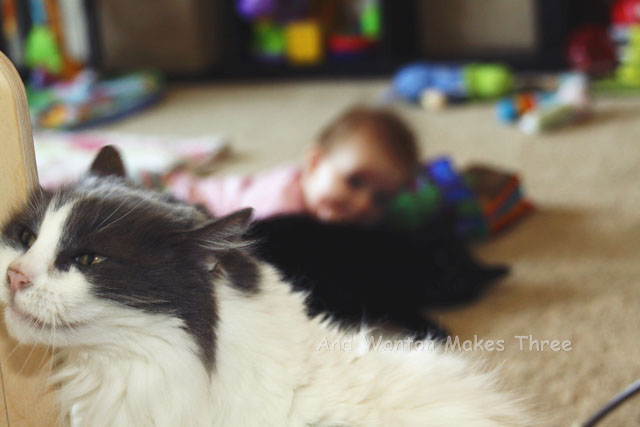 I suppose we just have ot keep luring them into the play room with treats and catnip in order to keep everyone amused. Apparently Enzo’s room still smells like cantip after the last time I put some in there because Uzi randomly went in there the other day and sprawled out on the floor. Enzo, as you can probably guess, is very pleased when that happens. 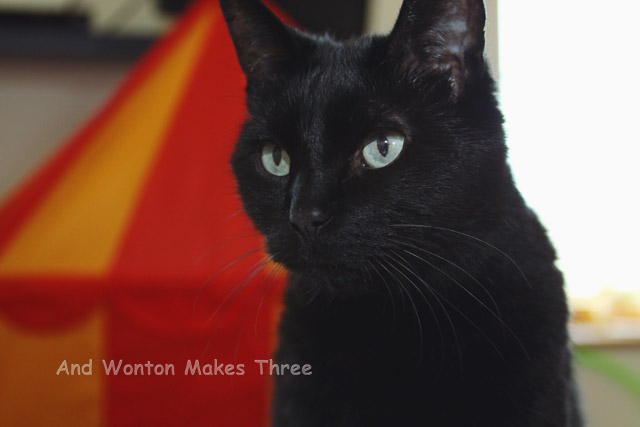 I’m constantly making the cats older than they actually are, but I think that Uzi is at least 10 years old, which would make Ziggy around 12 years old.  I think.  Somewhere I have paperwork of some kind that will end the mystery, or my sister will be able to tell me the year we got him because she’s much better at remembering things like numbers and I got him right after we moved into our first place together.  Anyhoo… the cats are alive and well, although apparently the average cat only lives to be 12-15 years?? That can’t be right since our last cat lived to be 21 years old.  Okay, so the cats are alive and well and most likely will be for a very long time. Random post complete.

While the cats still tend to stick to their own territory rather than spend a great deal of time with the kids, Uzi has his moments where he likes to get snuggly with Miss Phoebe. 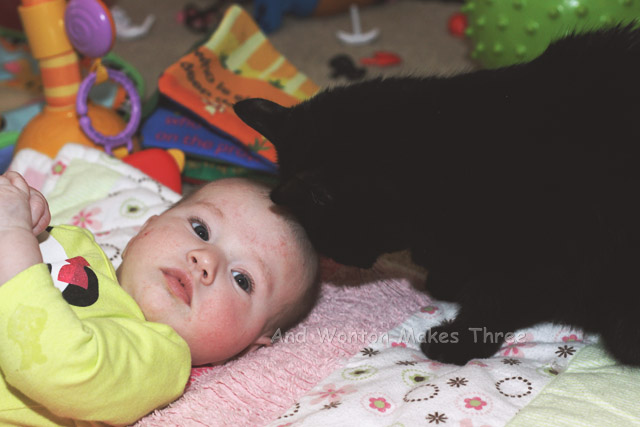 Enzo is still a little too loud for him, and unfortunately has gotten into the habit of saying, “No, kitty!” a lot, but only because we’ve had to also say that quite frequently as Uzi won’t stay off the kitchen table or counters.  Now, we just have to teach Enzo when kitty is actually being naughty and when he isn’t.

There are also those moments when Enzo doesn’t want kitty pushing him over (even if it is out of love), and in that case, Phoebe can’t really do anything about it so Uzi is free to give her as many head-butts as he wants to. 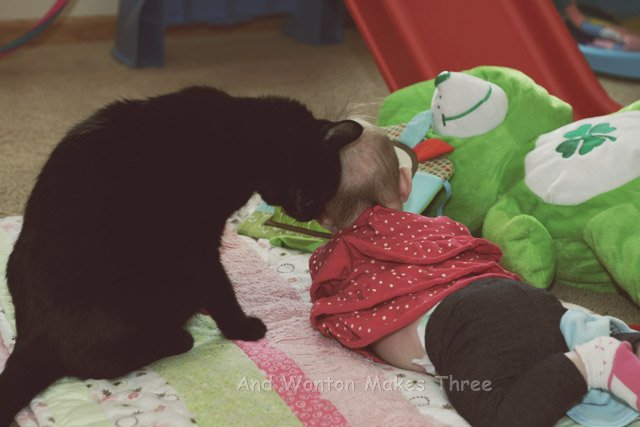 I don’t remember Uzi being quite so lovey with Enzo when he was a baby, so we’ll see how things change as our Toots gets older.  For now, though, it’s kind of sweet when Uzi curls up in bed between Phoebe and I, and gently puts a paw on her arm.

I think she enjoys it, even if she seems a little confused as to just what the strange furry creature is doing, and why it won’t stop so she can chew on it like her other soft toys. 😉 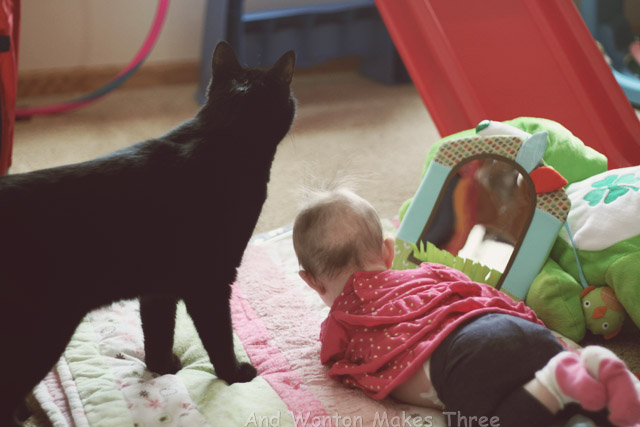 Depending on who you are, you either take big life changes in stride or you aren’t a fan of change, and acceptance is more gradual. Personally, I love my routines and while I can and do adapt as needed, I much prefer to keep things the same. My day will feel off if I wake up late and my routine has to suddenly change. I become generally more clumsy and scatterbrained, forgetting a myriad of things and bumbling about.

After 4 months I think the cats have finally adapted to our newest addition and the changes that come with a new baby.  I just realized the other day that Ziggy hasn’t pooed on the floor in at least a month or two, (maybe even more!) which is cause for great celebration.  We’ve been letting the cats sleep with us a few nights a week, and I think that’s really made the most difference in Ziggy.  She doesn’t come upstairs unless Enzo is asleep and that meant we rarely saw her and she wasn’t getting a lot of attention. Sure, we don’t always get the most restful sleep with the cats, but at least they carefully step around Phoebe… well, mostly. Ziggy has never been the most graceful of cats and is more likely to waddle over the baby. 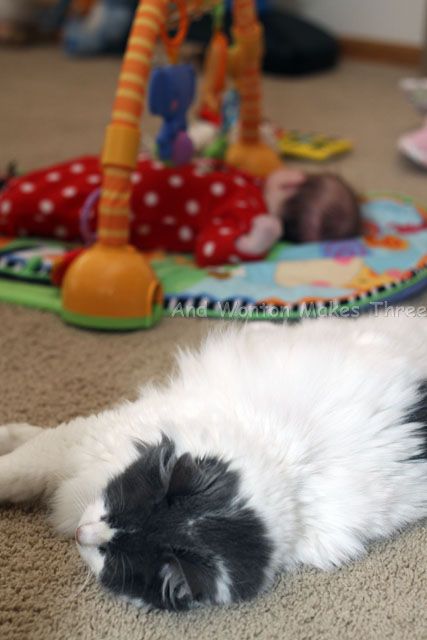 I’ve actually enjoyed having the cats upstairs again when they aren’t meowing (Uzi) and waking up the kids or pawing at Enzo’s door (Ziggy) in the middle of the night.  They’ve finally figured out that just because I’m up at 2 am getting Phoebe a bottle does not mean it’s breakfast time, and instead Uzi will curl up in bed with Josh while Ziggy comes and flops next to me feet while I feed Toots.  It’s really the most peaceful time of my day and I don’t mind it all that much… unless I’m super tired, in which case it’s Josh’s turn. 😉