I love a good long weekend, but it’s always that much harder to get going on Monday morning, and this Monday morning was especially difficult once we realized how cold it was.  Oh well, at least the days leading up today were pretty good, even if we didn’t venture out all that much.  We stuffed ourselves and hung out with family on Thursday, but once Friday hit we were on lock down. 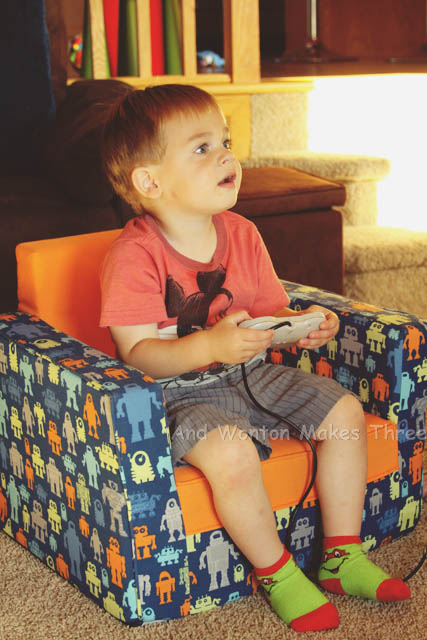 Ignore the fact that these pictures are from when it was actually warm enough to wear shorts and pretend that I’m not super behind on transferring photos from my camera to my computer and sorting them. Anyhoo, we decided that Enzo was ready for the next big step – potty training.  He had recently been showing all the signs and has been obsessed with potty books and apps/games on the Kindle, and when we asked if he wanted to wear undies, he was game. 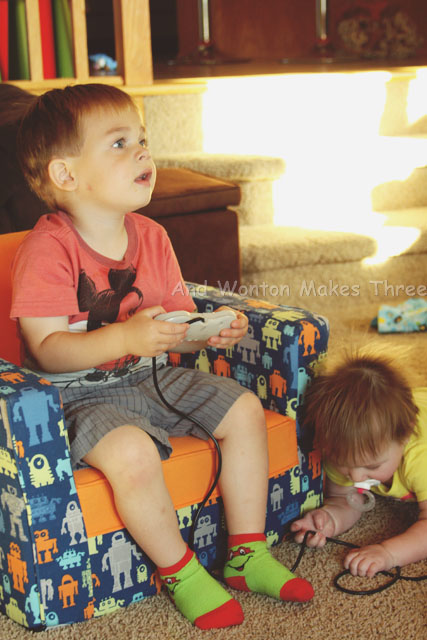 It actually didn’t go all that bad.  On Day 1 we had an accident pretty quickly, but then he also realized pretty quickly that underwear is very different than diapers.  During nap time we definitely had an accident and we talked about whether or not to use pullups.  Overall, a much easier day than I expected – he excitedly went potty frequently, flushed the toilet/emptied his potty seat, and washed his hands – all by himself. 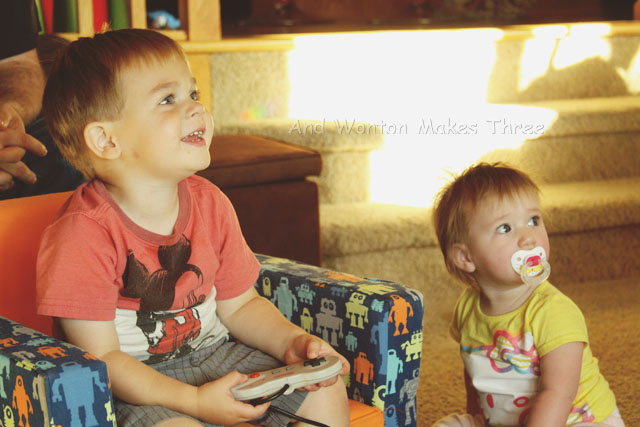 Gradually, it became a little more difficult, though.  We decided to do pull-ups, which I’ve been told will probably hold us back, so we may rethink this, but the big issue came with the other P word.  Pooping.  We had a couple of long days, but by Sunday evening everyone was pretty happy.  He really likes underwear and we like the idea of having only one kid in diapers.  Granted, we’re preparing ourselves for accidents and other issues, but we’re hoping we won’t have any major setbacks.  The biggest step will be taking the pull-ups off at night and just accepting that we’ll have to deal with a few accidents in the beginning.  It’s just hard with both of the kids not being the best sleepers right now. 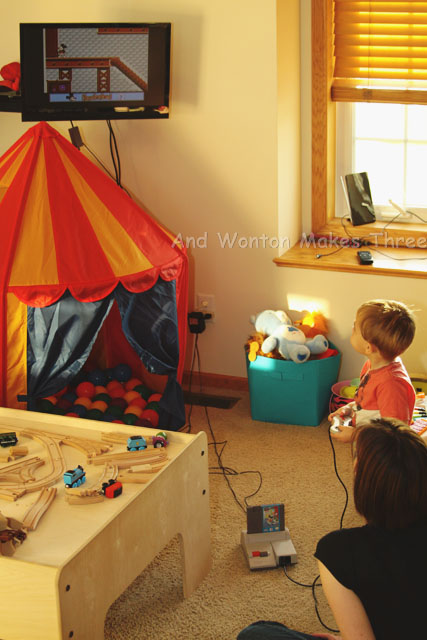 I’m kind of hoping that Phoebe’s sleep issue is just due to a growth spurt or is simply related to her age and will stop soon, but I’m still unsure as to what to do with our toddler. We’re giving him an earlier bedtime and are attempting everything to get him to sleep at a reasonable hour and keep him from waking up in the middle of the night and insisting on a parent to sleep with him, but are at our wit’s end.  I guess we’ll work on potty training for now and then figure out the sleep training later.

It feels almost silly to be writing about nothing, but during the Winter we tend to be homebodies… especially with two kiddos.  No one likes being bundled up, and options for things to do are limited unless we want to drive for an hour or more.  So… we spend a lot of time at home.  We did venture out to get Enzo’s haircut and both the kids did great.  Enzo looks like such a big boy now, and when we were done we let him play at the play area in the mall until it got too crowded.  The worst part is the kids who are way too big to be playing there and you have to watch them to make sure they don’t push over the smaller kids since their own parents are on their phones or chatting with other people and paying no attention whatsoever to their kids.  Grr.

Anyhoo, considering the Groundhog saw his shadow, it looks like we may be in for some more cabin fever yet while we dream about warmer days and all of the things we want to do this summer.  Considering what a happy gal Toots is, and how much better Enzo has been doing in the car, we should be able to get out and about plenty this year.  Lots of time at the zoo with our memberships, but probably some new things as well now that Enzo is older.  I think we’ll probably visit the Children’s Museum as well and probably a lot more playgrounds and beaches too.  Phoebe is generally just laid back and happy to be wherever, so I’m sure she won’t whatever we choose. 😉 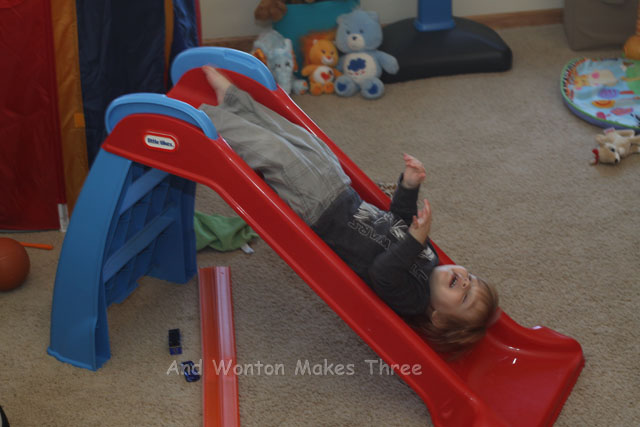 All in all we really got lucky with our kiddos and hopefully we may get to expand our usual day trips even longer. We’re thinking of maybe spending a weekend or two away from home visiting places we haven’t been to yet since we’ve lived here, like Duluth and probably plan at least one airplane trip this year.  I’m looking forward to hosting some of my family this year at our new house (as many family members as I can convince to come visit) and then we’ll see who else we can visit that can’t make it. Can you tell I’m desperate to get out of the house?? Oh Winter how you do drag on… 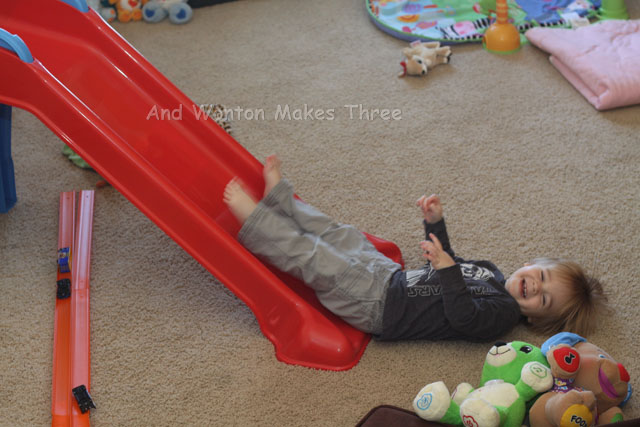 I meant to get these pictures up from Enzo’s first snow experience, but have been under the weather this week with a cold/sinus infection.  Thanks to antibiotics should be feeling like my old self again soon. Anyhoo…

Since our first real storm of the year dropped about a foot of snow, we thought it was the perfect time for Enzo to experience it, so we bundled him up (to his dismay) and went outside. 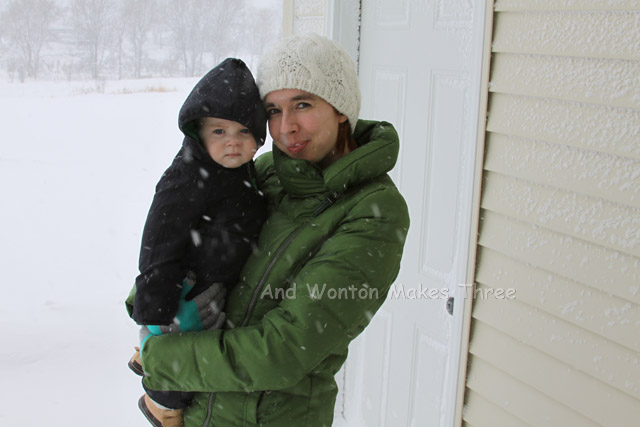 In hindsight, waiting for it to be less windy might have been a good idea since we had snow blowing in our faces and couldn’t really enjoy it. 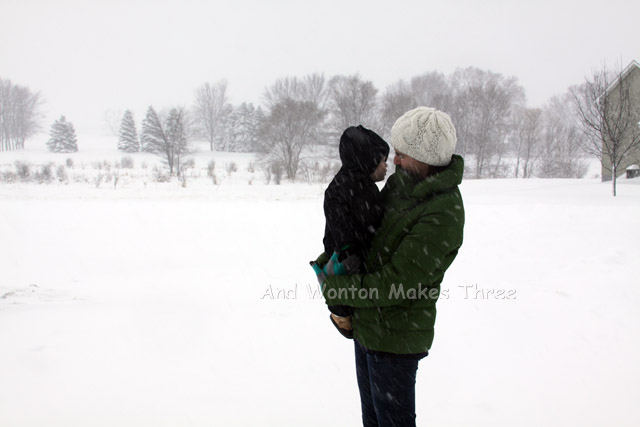 Enzo definitely seemed intrigued, though.  He was kind of in awe and just looked around a lot squinting his eyes from how bright it was and because his parents are morons and dragged him out into the wind. 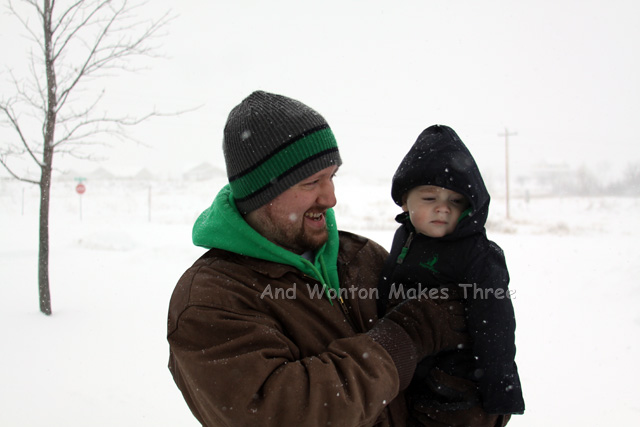 He puts up with us so well, and I’m glad he got to wear his first snow suit at least once before he outgrows it. 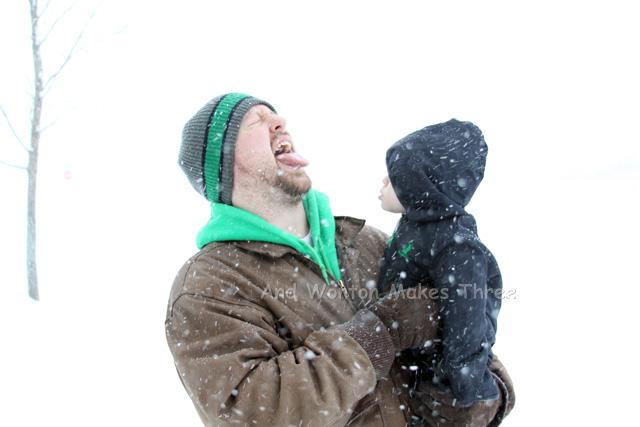 See?  Almost enjoying it as he tries to mimic his dad!  He did actually smile a few times while we were outside, though, we couldn’t catch those on camera…. probably because whenever we tried he’d get a gust of snow/wind in his face.  Oh well, maybe next time he’ll get to enjoy it more.

In this cold weather it seems especially hard to get outside, but we got out for a bit (despite single digits) this past weekend. There was a nip in the air that drove us back to the car after about 20 minutes, however. I was not made for these constant cold temperatures! 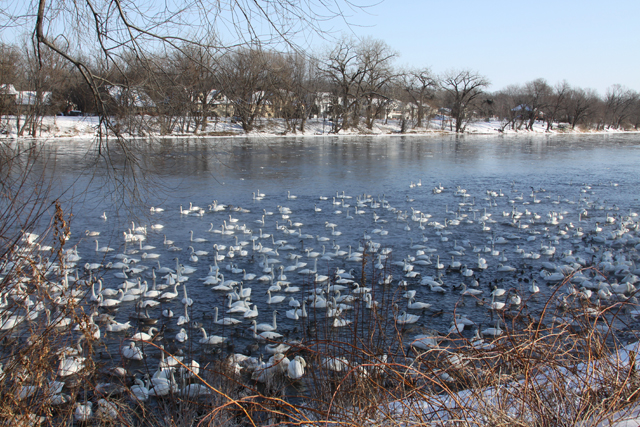 Anyhoo, last Saturday, armed with hot beverages and bundled up, we drove to Monticello to see the swans. The second we opened our doors, we knew we were in the right place, and not just because of the sign. No it was the cacophony of hundreds of swans, ducks, and Canadian geese that filled the air – feeding time was on. There’s not a large viewing area, and there are some ill-placed trees and bushes, but we managed to get some shots of the massive gathering, and will most likely go back with my tripod to get a panoramic view of the river and just how many birds can actually be there on any given day during the feeding frenzy. 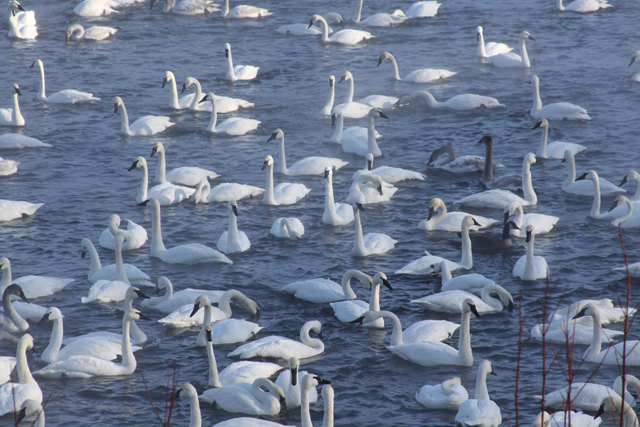 Unfortunately… I’ve checked the forecast and it looks like more singles and teens are in the future and potentially more snow, so probably not this weekend. Which is all right because we’re going to be combing our offices and turning my office into an official guest/game room, which in turn could be easily converted into a nursery, but it’s unlikely we’ll still be living there when that time comes. We’re going to throw the giant love sac in there for now, but will be on the lookout for a futon or something inexpensive that can serve as seating when needed and then turn into a bed for guests. 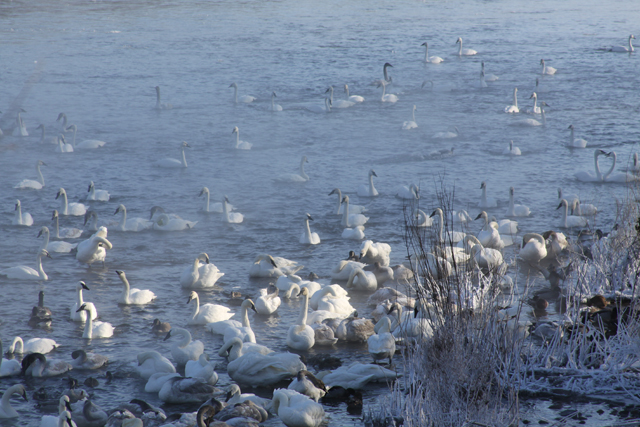 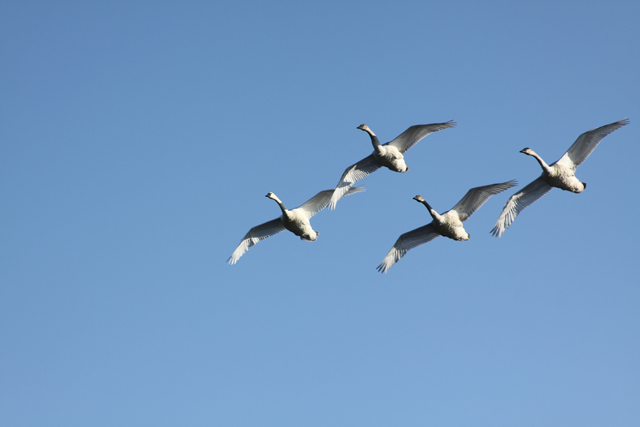 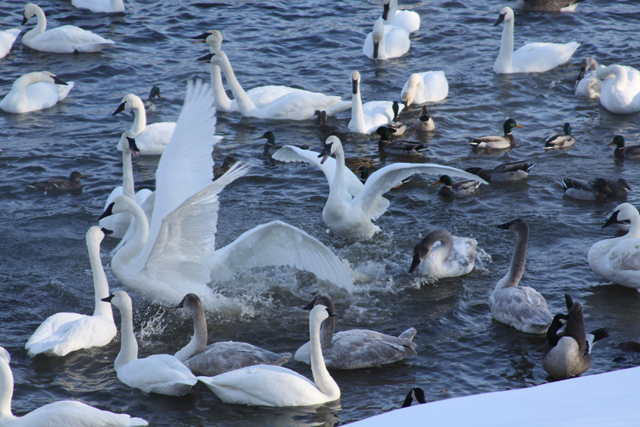 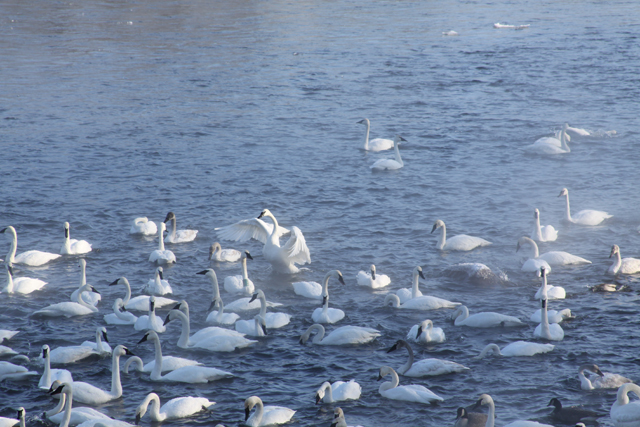 The cars won’t start, can you guess why?