Our little Phoebe has always been a busy bee, but now she’s really into anything and everything, and her frustration grows when she can’t have what she wants or lack of coordination gets in the way. Most of the time she’s as happy as can be, though, just exploring or chasing after her big brother.

I love to sit and watch her brain work as she carefully picks items up and then thoughtfully examines them before putting them in her mouth to chew on, or perhaps banging them against something else, or if it’s a car decide to take it for a drive.

It’s always a mystery to me which toys will hold her interest at any given moment, but more often than not she wants what Enzo has because clearly it must be the hot ticket item of the moment or he wouldn’t be playing with it.  We’re also finally at that stage where her big brother can’t just get away with grabbing a toy from her. Some toys she may not care about, but for the most part she wants it back and has no problem trying to take it back. She is no delicate flower. 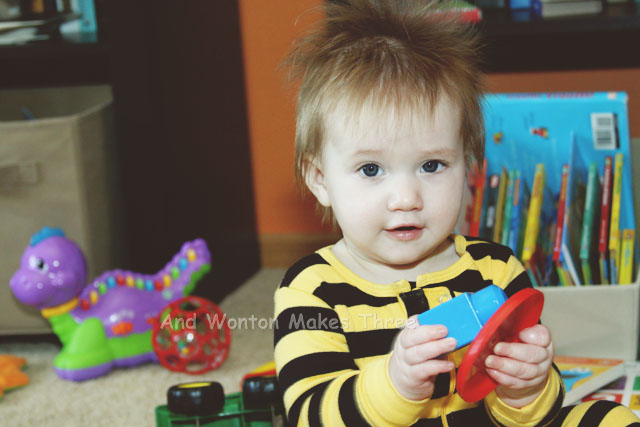 Which is good because I want her to be strong and stand up for herself.  We’re now trying to get her brother to stop teaching her how to hit, although it’s really his own fault now when she whacks him for taking her toy.  We’ll keep working on that, and in the meantime keep encouraging them to play together or at least peacefully next to each other occasionally using the same toys.

One great thing about day care is how quickly Enzo learned to play with and share with others.  That doesn’t mean he always shares nicely, but overall he does very well and we know Phoebe will learn to do the same. It’s also nice that we’re able to all play together at the same time and that Phoebe is learning so quickly.  She’s picking up new words almost daily and can point to her nose as well her mouth and say both (well, they mostly sound like they’re supposed to). She also prefers saying “Hi” over “Bye” and likes to wave and give high fives. I can only imagine what I’ll be adding in a few weeks when she’s officially 13 months old. 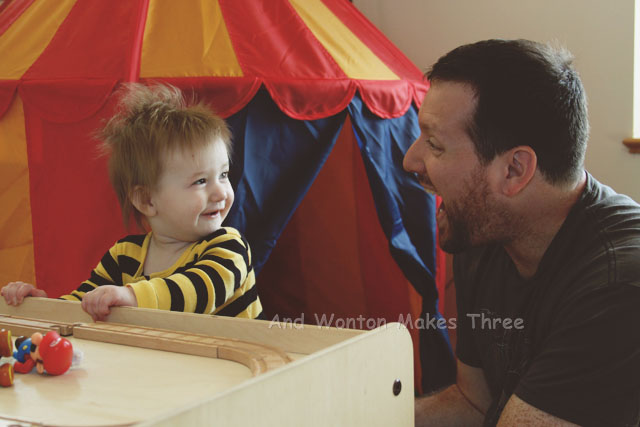